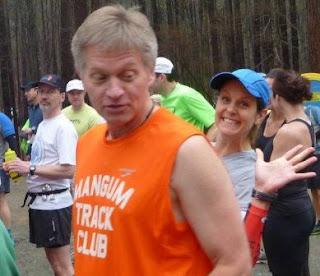 Each year this race has a different animal for its theme - this one went right along with the NC parks theme:  “Hang out with NC State parks - The year of the Bat!”  see here

Here it is, only 2 weeks after running Pilot Mountain Marathon, and I am running another trail marathon.  Normally I would wait and do a marathon once a month, but right now it is training time for U100.  This race fit in perfectly with my training schedule.

Woke up Saturday morning to the sound of rain.  Not just a little rain, but pouring.  Very reminiscent of City of Oaks 2009.  One of my Brooks friends Mark Manz said it perfectly in his Umstead race report:  “The forecast for Saturday was somewhere between Biblical Rain and The End of the World.”    Listening to it falling on the rooftop it was sounding that way.  Thankfully in checking the radar that morning, it was showing clearing throughout the day.  It looked like it would be a dry start.

My family and I made the short journey down the road to my “home turf” which is Umstead.  I run there weekly and consider it home.  Running on trails is what I like best.

We arrive to a very soggy state park.  I parked in a lot where 4WD was necessary.  Last year they had issues in this lot with people’s cars getting stuck, so they made it a 4WD lot this year.  The Jeep had no problems with it.  Just like me, it likes the trails!

The rain had cleared and the weather was cloudy, in the 60’s, and humid.  Could have been much worse - the system that had come through, was the same one that devastated areas to our west with tornados.  We received torrential rain overnight and still had a dry start for the race.

9:00 arrived and we were off!  I headed down the trail, then right on Reedy Creek towards the airport.  It was on that stretch that Joey was waiting to run a few miles with Jenn and I.  Jenn had it going on and was keeping a pace that I couldn‘t quite keep with.  Not too much faster, but just fast enough.  That is where she was at all day.

The single track trail was a mess by the time we arrived.  It was soggy and trampled by 150 or so runners ahead of me.  I took it really easy, watching my footing, keeping in mind that this was a race, but the ultimate race for me isn’t until March 31 at U100.  Today is a day to log miles, run smart, and be with friends.

Joey and I shared several miles together before a turnoff where I had to divert back onto the single track for the race and he continued on the Bridal trail.  We shared a sweaty hug, and then I was on my own.

It was nice out there, just a little humid.  Nothing hurt too bad.  Knees were doing good and there was no new pain.  Well, that is until I took a pit stop around mile 9.  I realized I was once again dealing with another UTI.  I was upset.  I had not had one in 3 months and thought that the reoccurring issue was solved, but I was once again faced with it - and not just at any time, but in the middle of a marathon.  I felt like it was a big setback.  It took me several miles to get my head back into focus on the race and not the pain of the infection.

I saw Andy and the kids along Turkey Creek and asked him for a dry shirt.  It had been warm humid early on, and my shirt was wet.  By now the temperature had started to drop and I was starting to feel the damp chill of the wet shirt.  He did not have one for me then, but said he would the next time by.

It was about this time that I saw one of the women runners coming back from the turnaround.  I am not sure who she was, but she had the most amazing abs I have ever seen on a female!   My guess is that she was a little older than me.  Not only was she fast, but she was strong.  Just watching her go by me was motivation in itself.  I think a 60 day ab challenge is in my forecast…

I need to get this quote in here that Gene Meade posted on race day which happened about this time in the race:  “My favorite moment from the Umstead Marathon - Walking with Amy Surrette’s daughter Kayla to the aid station on Turkey Creek trail when James Plant runs up on us.  Kayla digs in her pocket and produces a strip of bacon and hands it to Jimbo, who joyously consumes it, and heads on his way….. Priceless!”   I later found out when Andy and the kids went for breakfast that morning during the race, she took the time to order a bacon egg and cheese biscuit.  She picked off the bacon, wrapped it in a napkin, and put it in her pocket to save for Jim.  How awesome is that!

I saw Charles West out there handing out burritos to the fantastic volunteers at the aid stations.  I was yelling at him “Welcome to Moes!”  One of the volunteers said there were burritos waiting for me at the finish line.  Something awesome to look forward to!  Love me some Moes!

Saw Andy again and this time he had a dry shirt for me - yeah!  I got a ‘second wind’ of sorts after that.  At the aid station at Reedy Creek Road I was craving the Frito chips that I had passed up the first time I went by.  This time I asked for them and there was just one cup left - yay!  One just for me!  I started snacking.  It was then that the 3 brothers I had just passed arrived at the aid station and one of them asked for the chips and the volunteer said “Amy got the last one” *sigh*  I went over and gave him half my chips, smiled, then said, “here, I gotta go”  and took off down Reedy Creek eating and left them at the aid station.  *he he*

I was closing in on the last few miles.  Cedar Ridge out and back was going to be a tough one.  It is pretty much all downhill out, and you retrace your steps right back up on the way back.  The trail is much rockier too, it is not the well groomed surface that the other bridal trail is.  I was hauling down that hill when I saw James Plant heading back up from the turnaround.  I was running downhill fast and saying “weeeeee”  like the pigs on the Geico commercials.  We started laughing - he and I were doing that together a few weeks ago at Pilot.  I made it to the turnaround and started heading back up.  On the up climb I saw a dad and his 12 year old son slowly making their way down the trail.  I could see that the son was having a hard time with these last miles.  I spoke a few words of encouragement to him and continued on.  What an amazing thing to be able to run a tough trail marathon with your dad at 12 years old!  The thought of that kept me going up that hill.

I got back on Reedy Creek and was ready to be done.  New goal:  There were 2 sisters that had been ahead of me most of the day, and they were not too far ahead of me now.  I was no longer taking it easy on the hills and I had picked up the pace.  The goal was to catch them.  For the next mile I reeled them in.  After I caught them I kept the pace going and brought it in all the way to the finish.  My family was there to cheer me on.  5:09.  125th overall out of 200 or so starters.  I picked up my finishers pint glass and headed inside and found that long awaited burrito.  Sat down with family n friends and enjoyed the meal with some lively conversation.  It was indeed a good day!

*whew*  2 trail marathons in 2 weeks.  One on a dry sunny day and I felt great, the other on a humid day with soggy trails and I felt ok.  Thing is, I ran Umstead faster than Pilot…  and Pilot is supposedly 2 miles short of a full marathon, though they call it a full marathon.  I suppose the difficult terrain and elevation change makes up for the distance?

No ITB issues or new pain.  I need to get the UTI situation resolved so I am not dealing with it at U100.  That would be a serious deal breaker for that race.  The new shoes did great Brooks Adrenaline GTX‘s - awesome tread on them and I managed to stay upright the whole time.  I had a hot spot on my ball of my left foot and would have blistered had I gone on much longer.  That foot had gotten wet early on and was probably the cause of that issue.  Sailing down the hills is the reason for the soreness I am feeling in 3 of my toenails.  They might not make it to see U100.  I wore a new pair of gaiters and somehow managed to catch it on something and ripped a small hole in one of them.  Grrr.  I will have to sew that up soon.

I am encouraged that I did as well as I did running 2 marathons in 2 weeks.  Legs were indeed tired, but did fairly well.