(I find it interesting that I am writing this report as I am traveling to CO for another race – have to use the time wisely, right?  It might be shorter than other reports, but still *hopefully* interesting).

For several years Joey has wanted me to run Grandfather Mountain with him. He has run that race with most of his angels, except for me at this point.  So, finally, this year, I put it on my list.

My mileage was down after Sunburst and Boogie going into this race.  If you have been keeping up with my running this past spring, you already know that I had been racing a lot striving for that elusive BQ.  I am not one of those folks who can continually race and expect to do well, so I took a few weeks with much lower mileage to recover a bit.  Tendons were inflamed, muscles were sore, and my body was telling me that I needed to back off some.

Going into Grandfather I knew it was going to have to be an ‘easy’ effort because the following weekend I was going to be running in a 200 mile relay in Colorado.  Nothing like running a App Mountain Marathon to warm up for a Rocky Mountain Relay!  Hopefully it will work out well for me!

The kids and I headed out to Linville Falls Thursday afternoon in the Jeep with the camper in tow.  We set up then headed over to the start of “The Bear”.  It is a 5 mile run straight up the side of the mountain.  No, I was not running it, but wanted to see the start of it.  Lots of runners had gathered and it was interesting to be on the other side of the start line as a spectator.  I was loving the excitement and part of me was ready to run it – lol!

From there we drove around a bit, drove on the viaduct, (really good clear view today, snapped some pics) and had dinner in Sugar Mountain.

The next day the kids and I did some sightseeing and hiked over to Linville Falls, not the town, but the actual waterfalls off the parkway.  Water was a little deep and fast from all the rain NC had been getting!  Later on in the evening we met up with some running friends at Tim’s house for a pre-Grandfather Marathon pasta party.  Andy met up with us there after driving in from Raleigh on his motorcycle.  Great friends and great food! It was a fun place to hang out with friends, meet new friends, and carb up for the race.

Gnarles Barkley woke me up as he does each race morning at 3:45am singing “Crazy”.  Yeah, I’m just like that – hearing that song on race morning gets me ready for the day!

I did not plan well for this race.  Low mileage going into it and no gu’s.  I usually have 6 gus with me, but I had run out and did not get to the store to get any.  Andy had brought me some things like gummy bears, red vines and smarties.  Woo!  Yep, those will work too!  I had about a dozen s-caps so between the sweet snacks, s-caps and Gatorade at the aid stations I figured I could wing it…

We got to Kidd Brewer Stadium a bit before 5:30am.  It wasn’t long before the MTC and NCRC crew had gathered, several of us sporting our kilts.  The Highland Games are the place to wear them I hear ;)  I think it was Jenn who gave me a couple gels before the race – thank you!  Tucked them into my flip belt and I was ready to go!

We assembled on the track and soon the gun went off.  We took off around the track. It felt like a ‘warmup’ then we hit the streets.

I treated this race like an ultra where I ran the flats and downhills and powerwalked the uphills.  I was not prepared to race this event after taking several weeks to recover from Sunburst n Boogie.  I was just out here to have a good time with friends, oh and climb a mountain – lol!

I knew early on in the race that this was not going to be easy.  It was a humid morning and I was having a difficult time breathing.  By mile 2 I knew it was going to be a long day and I just had to ‘get it done’ with no time goal other than meeting the cutoff.  Ricky and I were running along together and he knew that I should have not been breathing that hard that early on.  He was talking me through it as we ran on, but I knew I had to back of the pace.   In doing this, I was not able to keep up with any of the NCRC/MTC group - Jenn, Margo, or Joey.  I was hoping to keep up with them for the first 10 miles.  Joey has pictures of his angels at a gate near the parkway at mile 10, but there would not be one with him and I this year… Sorry Joey!

I was not completely alone for the next 15 miles.  I ran with Marty from the start of the race.  We met in 2010 at OBX and again at Pilot Mountain in 2011.  It was good to log a few miles with him once again.

Starting about mile 17 after we got off the gravel road it became quite runnable.  I was feeling good and able to pick up the pace.  Nice winding road towards the mountain.

Somewhere around mile 19 is when Marty started pulling away. He was running strong. I might have been able to keep up had I had my usual gu/scap every 4 miles plan, but I didn’t…

Mile 23 is when the climb started again - had to reach 4,279 by the time I hit the finish.  More digging deeper and pushing forward.   Hamstrings were really tightening up but pushed through it.  It was these last few miles where I was going back n forth with another lady – she was 65 years old and running along great.  She called me awesome and I called her awesomeness.  We pushed each other along when the course started going uphill once again.  I hope when I am 65 I am running marathons up mountains like she is!!  People like her inspire me to keep on keepin on.

Mile 25, with permission, I stretched my legs on someone’s truck bumper – lol!  The owner asked if I needed anything, gu, Gatorade etc, but told them all I needed was to stretch a bit and keep moving.  I was getting so close to the finish!  Shortly after I started back running again I saw Joey coming back down the mountain to pick me up and run it in with me.  Woo!  How awesome is that??  In running it in with him I pushed the pace up that last uphill section and was feeling every bit of it.  We made that right turn into the finish area and up a gravel hill.  There were a LOT of folks cheering us on (benefit of finishing behind your friends – lol!) Marty was there and gave me a high 5.  On the other side of the track was my family cheering me on – woo!!  Joey and I took the final ¾ lap around the track and I finished strong.

We gathered on the hill near the finish with the NCRC and MTC crowd.  It was a great time.  We ate some, drank some and cheered folks in as they finished.

Later on, my family and I went to go get some food at the Highland games.  We sat in the stadium and watched some of the games.  It didn’t rain on us but it sure looked threatening!  The girls enjoyed watching the dancers.  Drew liked watching the guys throw the telephone pole.  It was a fun place to people watch as well – lol!   O my goodness, lots of interesting folks out there, right Margo?  ;)

After a bit we ended up catching the shuttle down the mountain – seated, unlike Joey, Jenn and Gene who had to stand on their ride when the left earlier – boo!  It was a long ride and I was not feelin so good.  I had pintos n cornbread at the games, the pintos were good, but the fatback that was in it was not - :P  Not quite how I make them at home, that is for sure!  Lunch was not sitting well and I also felt like I was getting a bit ‘bus sick’ from the curvy mountain roads.  o_o

We got to the Jeep and got on the road to Linville falls.  Somewhere along the parkway I told Andy to pull over – I was not feelin good.  :s  A few dry heaves later I was back in the Jeep.  Little bit of carsick…  Managed to travel the rest of the way with the window down for air…

We got to the campground and I got cleaned up (best-shower-ever) I think I say that after every race – lol!  Best thing about this one?  I didn’t chafe!!  :D

Later on we went out for dinner and settled in for the night.  About 8:00 it started raining.  It kept raining all night long.  Not just a sprinkle either.  It poured all night long.  I slept maybe an hour and a half.  It was so loud on the roof of the camper…

We packed up the next morning in the pouring rain and left in the rain.  The rain didn’t stop until I hit I40.  Later I learned that they had to cancel Sunday’s Highland Games because of the weather.

This was a great race.  I dare say it was the toughest marathon I have run.  Bethel Hill Midnight Boogie a close second which has its own reasons for being tough.  New River was tough but at least there were downhills to fly down.  This race was indeed a climb.  Would I run it again? Yes.  I need to – there is a picture that still needs to be taken by a gate at mile 10. ;) I would also like to improve my time by at least 35 min.  Proper fueling, getting more sleep, and keeping my mileage up would have helped greatly.  Running it while recovering was probably not the best idea, but when has anyone ever told me that I do a lot of wise things when it comes to running and racin?  Lol! Ya know its all who I hang out with, right?  Who was it that was telling me that Boogie would be a great first 50 miler? Yep, and I still run with him every week.   Bring it on. 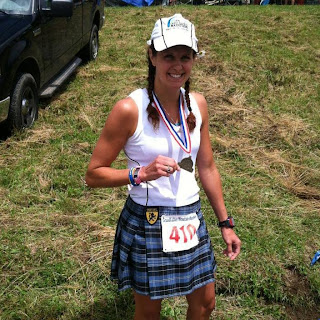 Til the next race, *cheers*

Shoes – Hoka Bondi B’s with Feetures socks.  No compression socks today!
Kilt – made by Sportkilt
Watch – Garmin 305 (refurb June 2013)
Fuel – 10 s caps, gummy bears, 2 hammergels, 1 5 hour energy, Gatorade and water
Damage? – One fairly big blister on one of my toes.  No chafe tho!
Posted by amosmotor at 4:49 AM