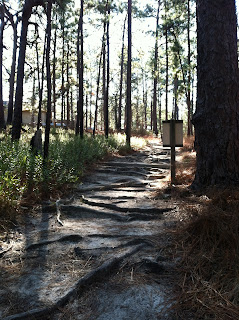 The days leading up to this race I felt no race day jitters and the nervousness that comes with many of the races I run.  I was excited about it, but I had no expectations and I think that is part of why I was so laid back about it.

Saturday morning I awoke well before the sun and met up with Jennifer Ennis, Frank Lilly, Erich Chatham and Charles West to carpool down to Southern Pines, NC.  It was a quick drive from Raleigh to meet up with the 80 or so runners who registered for the race.  It was an event that was sponsored in part by Mangum track club so it was an extended family reunion of ultra runners from the area.

We started promptly at 8am.  It was a clear, cold morning.  I started off running with Joey and Jenn.  I was hoping to hang with Jenn for a while then go from there.  I knew Joey was going for big things so I would not keep his pace for too long.

The course was beautiful but fairly challenging.  Most of it was sandy with roots and pine straw.  There were some hills on the course and a few bridges.  It was all in the woods.  Not sure if there was a controlled burn or if there was a forest fire a few years back, but the tall pines showed burn marks on them about 5 feet up from the ground.  It was pretty cool. There were 2 aid stations one main one at the visitors center where we started and one on the back side of the loop manned by Doug Dawkins and Jimmy Ballard.

I was running with James Plant ready to assend the last hill before the end of the first loop when I felt my knee twinge…  *oh no* I told Jim to go on ahead, I had to take it easy because my ITB was flaring up again.  It did this same thing around mile 25 at the boxing day madness FA in December.  I figured it would start hurting again today, but I was not expecting it to start at mile 4.  It was going to be a long, long day.

I decided to go for a 50K  I started a good run / walk pattern.  I ran til it hurt then walked for a while, then started running again when the pain went away.  The walk I was keeping was a fast race walk with running in between.

There were a lot of families out there.  Watching the parents and the kids, made me miss my own family being there.  They have been in attendance for many of my races but this one they ended up staying home.

I kept fueling like I was going for a full day.  I have learned in the past from these kind of races to stay hydrated and eat.  I was thrilled to stop by the first aid station right after a delivery of hot pizzas!  Grabbed one for the trail and some coconut water and headed back out.

I was really enjoying the day.  It was beautiful and had ‘warmed up’ enough to take off the jacket.  I kept long sleeves and long pants on all day though.   Saw many runners with T’s and shorts but I was not moving fast enough to make that much heat. It ended up being an all day walk in the woods.  Really, it was….

I encouraged those who were passing me.  They were having great days and I was thrilled for them!  I was happy to see Joey lap me and give me a hug sometime in there, but he was sad to have lapped me so soon.  He knew I was having ITB issues and was hoping, like me, that it was not going to give me problems today.  There were some Brooks ID’ers out there and I was happy they were having great days.  Of course I had to cheer them on and tell them to “run happy”!

I had the chance to run and walk with many people who I don’t normally get the chance to and it was great.  Most of the time I would run with them for a while and keep their pace then drop back when my knee started hurting again.  I am thankful for those few moments to have spent with those I normally only interact with on face book.  It was good.

By the time I had finished my 50K I was ready to continue on.  I wanted to complete one lap in the dark.  I knew that continuing on much longer in the dark would run the risk of hypothermia so I opted to stay out for ‘just one more lap’.  The lap started out at dusk and I had noticed the markers on the course had glow sticks hanging on them, but nobody had come out and cracked them to get them to light up.  Not sure if it was my place to do it, but I set out on this lap and took it upon myself to get the glow sticks glowing.  Someone had seen me working on them and had done a couple as she moved ahead of me, but for the most part, she was racing and left them for me to do.  It was nice to have a distraction and something to do.  It became harder the darker it got to navigate and find the glow sticks.  I had my headlamp on and there were signs, and typically after a turn or a curve in the trail there was a glow stick, I just had to try to find it.

The sun was down, a light breeze picked up, and the temperature dropped fast.  I was glad I put on my ‘team Surrette’ vest that my SIL made.  She made one for not only myself, but for Andy and the kids as well.  J

I grabbed a hot chocolate and marshmallows from aid station 2 and headed out for my final miles through the woods, singing with my iTunes, and lighting glow sticks along the way.  I was looking at just over 40 miles.  I knew it was far short of the 63 miles I was hoping to complete, but still, 40 miles?  I really can’t be disappointed in that distance.  It was way slow, and done with an injury.  11 hours 15 minutes.  I crossed my finish line with a smile - Frank Lilly was there to say congrats!  I went inside to warm up for a bit, got a massage, and ate a little bit.  Turns out Blanca cut her run short too because of a foot issue.  She and I hung out and talked for a while.

I saw Paul Heckert as he was heading back out.  The first time I met him was at Bethel Hill 50 miler and I cheered him on to his 50 mile finish.  He is truly inspiring.  I knew that if I stuck with him, that he and I could have finished the race together in the wee hours of the morning.  I still had hypothermia fresh in my mind from December and dared not venture back out in the cold.  He and I covered a lot of distance together at CR24 and I enjoyed spending time with him.  I was glad to see he was doing well and going back out.  He wanted to keep moving to avoid the cut off.   He missed it last year and he wanted to do better this year.

The best part of the night was yet to come.  Had I been out on the course I would have missed this.  I had the opportunity to see my friends cross the finish line and be there to congratulate them!  John Adamoff came across looking fantastic well under the qualifying time for Western States.  Charles West finished a little later on still within qualifying time, followed closely by Ultraman Joey.  Jenn finished up shortly behind them after having fighting through some issues early in the day.  I was so proud of all of them for toughing it out.

We stayed long enough for everyone to get a massage, then we packed it up and headed back with Frank driving.

I got home about 1am, took a much needed shower and crashed.  The next day I surveyed the damage, obviously my ITB had issues, my achilles was inflamed for making up for the bum knee.  The lower part of my hamstrings were very tight and sore and my lower back hurt, but that usually happens after a long distance.  One blister on my left heel and one toenail that will be lost due to stubbing it on a root.  Not too bad considering…..

Oh and by the way - Paul did not miss the cut off, he finished!!  I checked the website the next day.  He received the DFL award and came in right at 20 hours.  I am so happy for him and the effort he put into this run.  He is an inspiring!

Where do I go from here?  Recovery I hope.  I have been blessed these past 3 years to have no serious injuries.  U100 is looming on the horizon.  Before that is Pilot Mountain Marathon and Umstead Marathon.  You can bet I will be icing, using the foam roller, taking anti inflammatory and stretching.  Maybe a couple appointments with Dr Pain would help as well.

Thanks to everyone who made this run so memorable.  Mangum Track Club, Brooks Running, Frank Lilly for driving the Jeep back, all those who worked at the aid stations in the cold, all the families who came out to support your runner.  Congrats to all those who qualified for Western States.  A special congrats to Mark Manz, Jay Edge, John Adamoff, Jeff Sackaroff, Charles West, and Joey Anderson.  I hope your name gets drawn this year!

Yes, it was my first DNF, but I heard someone say instead of “Did Not Finish“, “Did Nothing Foolish”.   I still have high hopes of recovering and going the distance at U100.
Posted by amosmotor at 6:01 AM 7 comments: