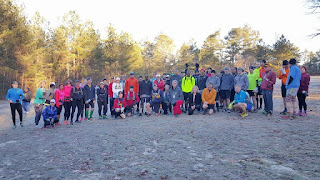 Here is a bit of a different race report, from not only me, but Ken as well.  It was his first 50K and though we ran every step together he has his own unique point of view and is so worth sharing :)  His thoughts are in blue


My thoughts coming into this, my first ultra were:
It is going to be a whole new experience…I never traveled this far on foot in one shot, have 18 total miles in for January and really have not been running for the past year…oh well, I have a 24 hour event to get ready for this year so let’s do this and see what happens.
I won’t be happy only doing one loop.  I don’t want to settle for two but if that’s what happens ok.  I hope to go as far as Amy and stay with her as long as I can.
Man, I sure hope the aid station snacks don’t mess me up too bad…if ya know what I mean.
Saturday morning dawned clear and cold for the 2016 NCFA event.  It was supposed to warm up into the 60's, but until then it was cold!!!!

This was my first 50K.  I really didn’t know what to expect but I had Amy by my side…so yeah, I was good to go.  The drive there was fun as we monitored the temperature and joked about who was complaining.  Then once the sun came up we were able to watch the shadow cast by the Jeep follow along with us…too cool…but it never did get any warmer.

Ken and I drove down from Raleigh to Ellerbee at the Millstone 4-H camp.  It was his first attempt at a 50K and what a day to do it.  We left the house later than expected and cut the time pretty close but arrived with 15 min to spare.  Even at that, the race got underway just a little after 8.

We get there and park with enough time to lace up and walk to the start/finish line.  At the start/finish area Amy meets and talks with friends, who all made me feel quite welcome, and we come to find out that we could have parked here too.  Then a few quick words at the start, a picture or two and we were off…ok that was chill.

The course was 3 loops of 10.1 miles each. There was an aid station around mile 5.

The course was not super hilly or technical but was VERY sandy.  Most areas were runable but others were difficult to navigate, either because of loose sand or mud and water.

We started out and it was below freezing.  I was wearing long pants and long sleeves.  Shoulda had gloves!  Took a long time for my muscles to wake up.  I was not feelin it.  Bout 5 miles in i was wondering if i was even going to make the first lap let alone 3.  I was tired and was having a hard time finding a groove.

Saw Duke and Missy at the aid station at about mile 5.  Took in some cookies and coke and took back off again.  Was starting to feel pretty good and was finding a good run/walk rhythm.  Ken was doin great.  He was figuring out the whole run the straightaways and runnable sections and walk the hills and loose sand sections.


1st lap - Man it’s cold and I’m tired…This is a very chill atmosphere compared to any other race I have done…Hope this sand doesn’t screw with my knee too much…but I can’t complain listening to some of the stories being told…The aid station snacks are great.  (Thanks to those who took care of all that)

Came back in to the start area, ran back to where I parked the Jeep and moved it closer to the start area.  Changed clothes and was in shorts as it warmed up some.  Took in a protein drink and plenty of water and we were off again.


1st lap done…we did not keep our time for this lap…grab a soda and snacks…we walk back to the jeep and drive it back to the start/finish.  Change shirts, loose a layer or 2, refuel and back out we go.

Lap 2 was warmer and now familiar ground.  I was feeling much better about the run and making it all the way.  Funny how that can happen where things can turn around - you are in a spot where you are not feelin it and you work through it and are able  to move on. :)

It was fun to run / walk with Ken and lead him through his first ultra.  There were times when I was struggling and there were times that he was but we worked through it together.  We covered the distance together - sometimes hand in hand.  It was a good time for us to be together, be with friends and run somewhere new.


2nd lap – we’re heading out, at the turn where the loop crosses and here comes the lead runner…holy cow he is cruising…I’ve never did an event where a you would run/walk on purpose but after lap 1 and getting into Lap 2 not only did we have a good rhythm going we were having a great time with it.  We picked things like a certain pole to run to, the different color dirt or the fuzzy little tree.  Yes those fuzzy little trees were happy little trees.  About 2 miles out from the finish we started talking about the lead runner, trying to figure out if we were going to get lapped because we knew it would be close.  Shortly after that, it happened.  We were lapped and we both go “nooooo”.  Congrats to him though!!!

We finished lap 2 and stopped to refuel.  I ran out of the protein drinks i had but i had a lot of packets of that generation u can... so i had one of those... not my favorite but had them leftover from something and it did the job.  changed into a tank top and shorts, even though it was in the 50's, but i was way to warm in the long sleeves.  the tank worked.

I was feelin good and the lousiness of how I was feeling that first lap was gone.  Only took 20 miles to warm up - lol!

Ken was doing great.  Could tell he was struggling some, he kept sighing and making a horsie noise "pbbbbbbtt" - made me laugh...  we did a lot of "run to that fuzzy tree" or "walk when we get to that clay".  We pushed each other along - many times still hand in hand.


3rd lap – Oh crap, Amy wants that 3rd lap and so do I… ok here we go…  I knew she had my back for this and not finishing was never really an option.  I did not expect Amy to stay with for this lap because she just seemed to be getting stronger with every step we would take.  The way we would push challenge each other was perfect.   Went through the aid station on this lap and I entered that new mileage territory.  Things were hurting from my core down but it is what it is…when we stopped running there would be a horsie sound (started earlier in the day) as I gathered myself and an ouch when we started running.  Yes, Amy would laugh and encourage me to keep going…”we got this”…and we did.  Finished lap 3 in the time that we wanted and Amy stayed with me the entire time.  Now for a cold beer and a couple shots to celebrate!!!

We came in on that last turn to a cheering MTC finish.  Mentioned that it was Kens first 50K / ultra and the the cheering increased.  Proud of him and how well he did on such a tough course.
Rosemary was one of those people who was having a tough first half. She thought she was going to drop after lap 2 with how she was feeling, but she turned it around, and finished strong and with a smile!  Really proud of her for that! Great job!!

We cracked a couple beverages and chilled with folks at the finish for a while.

Went to the cabin to get a shower - yeah a shower after an ultra, on the property where the race was - how cool is that!!?  Followed Lee to the cabin and when we opened the door to the cabin Lee said "that wasn't me, thats just the smell of the water"   LOL!!  Yeah, the water had a certain sulfur smell to it, but it was warm and knocked the salt and runner smell off ya... but you did kinda smell like PU - LOL!!!

Rosemary was there and took a shower too.  I was in the cabin when her skin hit the water and I heard an all to familiar "aggggghhhhhhhh"  I yelled to her, "did you chafe?"  she said "YEAH"  - yep, been there before!

Ken and I were outside and he looked at my U100 pendant.  He said "wow - that sure is tarnished!"  I looked and sure enough, that sulfur shower turned my pendant nearly gold looking!!!   I've worn it nearly every day since I earned it a few years ago and never had to polish it.  it was crazy!!!  What a good laugh!

Met up in the main cabin for a potluck with a few people who stayed.  Great food and even better company.  I can't ask for better friends.

Didn't stay the night, had to get back... missed out on playing the guitar together with Lee around the campfire... have to get together again soon to do that!

On the way home Ken asked, what is that smell?  No, I didn't break wind, but after a minute I figured out that it was my hair that still smelled like the shower!  lol!  Got home and I washed my hair 4 times and most of the smell came out.  Took several days for the smell to completely fade...

What a great way to spend the day, peaceful trails, meeting new people, a new race experience and Amy by my side…yes we were holding hands and enjoying the company of each other and yes at the end of the day other runners were saying “hey you’re still holding hands”.

I met new, real people that I will see again and call friend.  Thank you for the food and awful smelling showers.  It was all greatly appreciated.
I am hurting but thrilled to have finished and have this as my first ultra.   The time and distance again were all new but it went better than I ever thought possible. Also need to mention that the snack did not wreak the havoc that I thought they would.
Thanks for sticking with me and pulling me through Amy, I guess you really are a runner.  <3

As usual it is soooo great to see my MTC family.  Good for the soul to spend time with great people :)

Yes Ken, I really am a runner - no haven't been running much over the past few months but look forward to many miles with you side by side...

Cheers!
Posted by amosmotor at 3:55 PM No comments: