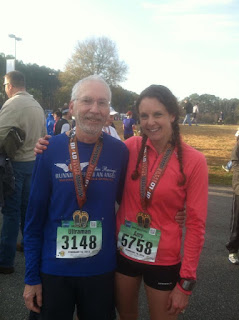 I registered for this race several months ago as part of the marathon training plan for Boston Qualifying attempt.   The timing of it was great for getting in a hard half to see if I was anywhere in the ball park for coming close to my BQ time of 3:40, or 3:39:59 as it is now.  No “free rides” anymore with the free seconds up to :59…  anyhow…

Joey and I left Friday for the beach.  Stayed at the Breakers where other NCRC folks were stayin at well.  I checked into my room and chilled out for a bit before heading over to carb up at Villa Romana with Joey.  We got back to the hotel n chilled out for a bit with Rebecca before calling it a night.

I woke up well before my alarm at 3:45am.  Was going to try to go back to sleep, but there was no hope for that.  I got up, grabbed some breakfast, (which included a packet of Starbucks via in my Shakeology) packed my drop bag, and met up with several NCRC folks downstairs for the mile walk to the start.  Yep, 1 mile walk for a warmup – that’s how we roll ;)

The weather was beautiful, low 40’s and clear skies.  The early start time of 6:30am had us starting in the dark, but within a few miles we would be running under sunny skies.

There was just enough time for us to hit the port a potties and take care of our drop bags when we arrived.  We lined up with the other half marathon runners and before long we were off!!  It was quite crowded.  Took us about 30 seconds to reach the timing mats.

I knew that mile 1 was going to be hard for me to hold back on.  I was quite caffeinated and the excitement of race day were in high gear.  I heard this familiar voice say “Amy, calm down” during that first mile, so I backed off some.  I didn’t like seeing that split at 8:24, but I knew it was what we needed to do to warm up before getting into a groove.  In this first mile we kept getting passed by folks and it was making me anxious.  One jerk elbowed me to get ahead of me and got me a lil upset.  Come on, it’s the first mile!!  Really?

We kept a pretty good pace going right under 8 minutes for several miles.  I was working on keeping a steady pace just a few steps behind Joey.  It was a comfortable pace, but I was working at it.  Certainly not my “easy run” workout.  The tables had turned and we were passing more people than those who were passing us.  It was good.

I took a gu about 45 minutes in, and shortly thereafter, my stomach was not liking it too well.  I managed to keep it down, but my body was not used to taking anything in while running those quick times.  We passed many restaurants which were in full breakfast mode, and the smell of bacon was not agreeing with me…  :s  unusual, I know, but the smell was making me nauseous…  I breathed through my mouth until the smell would pass then start breathing through my nose again – lol!

We got to the official 10K split with the timing mats and it seemed like it was off by .3 miles judging by my Garmin and the splits that Joey was keeping up with on his watch.  It showed us as being behind, when all the data we had showed us that we were right where we needed to be.

Shortly after, I finally took off my gloves and got some tunes going (just one earbud).  Needed something to help keep me motivated!  Sang out loud occasionally, cause that was how I was feelin. :) Managed to crank out a few more sub 8 miles.

Was looking around at peoples shoes most of the race, and it was not surprising that I did not see any other Hokas.  Guess I was the only one who thought it was “time to fly” in my moon boots ;)  They might look funny, appear big and bulky, but they are just as lightweight as any other shoe and if u ask me, it’s like TempurPedic for your feet!  Love em!!!

Finally the point came in the race with 5K left to go and I knew it was time to start bringing it if I had anything left.  I took another gu and started picking up the pace.  I was hoping that I would have more left in the tank, but still the times were still dropping.  Mile 11 (by Joeys watch) was 7:44 and 12 was 7:41.  With a mile left to go I started giving it even more.  Saw a guy wearing a shirt with the verse “I can do all things through Christ who strengthens me” on the back of it.  It was exactly what I needed to see and brought a smile to my face.  I thanked him for wearing it, gave him some encouragement (as I passed him ;) ) and that lap was 7:33.

We got into the finish shoot where there was not a lot of room to pass people.  There was one girl that I really wanted to get around, but I couldn’t right away because of the sharp curve and the narrowness of the road.  It annoyed me, but I managed to get around her and kick it into that last gear to the finish.  It was then I heard Dennis and Dianne cheering Joey and I on and it just made for an awesome finish. I was flyin. End time? 1:43:29.  A minute and a half faster than goal pace.   Talk about a huge confidence boost!  All this training is paying off.
We hung out for a while getting some pictures taken, enjoyed some early morning hops, talking with friends, cheering on friends, and having a good time.  We walked back to the hotel (which seemed to take longer than the walk to the start) and Rebecca, Joey and I took a polar plunge / ice bath in the ocean to celebrate :) (click here to see the video) (followed thereafter by a long soak in the hot tub).

It was an awesome day.  The weather was perfect.  The training that Joey and I did was spot on and we were able to bring it on race day.

Here is the split info for the data geeks.  I used a Garmin 305.  My splits are a little different than Joeys as I was using the Garmin estimated distance and he was using a stopwatch and hitting lap at each mile marker.  Both are consistent with the information though.  I even remembered to stop it as I crossed the finish!  First time ever I think – lol!  Check out that kick at the end – 6:43 pace?  Yeah!!

Top of Form
Bottom of Form
Export to CSV

One thing that stands out with me is the heartrate info.  I was in the starting corral watching it and it was holding steady between 60 and 70 even with the caffeine and race day excitement. During the race it kept steadily climbing….  It was at 87% average of my max for the entire race, and ended at 97% of my max.  Never hit 182+, which is my nauseous point…

A big thanks goes out to Joey.  His friendship, coaching, and willingness to run with me on getting to my BQ this year has made us both stronger.  We push each other along in the training, and have logged many miles together.  I wouldn’t be anywhere near the runner I am now, if it wasn’t for him.  He posted this on my wall on facebook this morning:  "Let's see. You just ran a 5 k in 23:40 AFTER doing a 10 mile warm-up at 7:58 pace. In case I haven't said it in the last 24 hours, you are AWESOME !  just wondering how that stacks up against your most recent 5k's?"  My last 5K was 23:33 in October 2012. I was givin it my all too.  No doubt I could crush that time now ;)

Two days post-race I am somewhat sore, but nothing too bad.  Sitting in the car and driving for 3 hours made the muscles tighten up, but doin good today.  Started the day early at Arrichion with hot yoga to stretch out the soreness, then circuit training.  I will run again tomorrow and see Jay for a painful massage later in the week.  The mix of speedwork, yoga, circuit, massage and higher weekly miles is working well in bringing my times down without injury.  Going to stick with it, probably climb firetower in Boone again before toeing the line for that BQ in March.

Now it is 4 weeks til the BQ attempt.  I am thinkin 1 week of recovery, 2 more weeks of solid training, then another taper week til the big day.  It is well within reach. Plugging my half marathon time into the race calculator (http://www.mcmillanrunning.com/) puts me between a 3:35 and 3:40 for the full which is just below the time I need and close to where Joey needs to be for his BQ.  Praying for good health, no injuries, and good weather.   I am so thankful  to God to be healthy and to have the time to train.  I know that many folks don’t have their health and would love to be able to run or simply walk without pain.  Running is what I like to do in my free time, but I am also aware of how much of a gift it is.

Looking forward to seeing what will unfold in these next 4 weeks.
Posted by amosmotor at 7:08 AM No comments: