Better late than never, right?  lol!  Took me long enough to finally get around to writing this...  so it goes.  Sometimes life gets in the way ya know?

I left Friday afternoon from a very snowy Raleigh, NC to Myrtle Beach, SC.  The weather was clear and the roads were mostly dry, just some water from the melting snow from the past weeks snowfall.

I made into the town and went right to packet pickup.  Saw Lee and Ginger there.  Checked into my hotel room then met back up with them and a few others for dinner at Mellow Mushroom.

I had my alarm set for 4:30am Saturday, but I was awoken earlier by my hotel neighbors slamming doors, yelling at their kids and the smell of cigarette smoke.  lovely!!  :s  Aside from that, the rest of the morning in my room was uneventful.  Had a breakfast of a protein drink and Starbucks.  Went downstairs to catch the shuttle but instead caught a ride with Gary and walked the rest of the way in the rain to the start.

I saw Cindy smiling in her pacer tank and and thanked her again for the flower she sent to me - I wore it in my hair for the race - she was sending me good vibes for the day :D

It was a bummer that it was windy and chilly at the start... I didn't know whether or not to keep my coat on or not, but decided to.  Glad I did!  It was needed for those first few miles and again right after the finish.

Leading up to this race i was not feeling all too well.  I hadn't been running much because I had been sick, but did have a good long run 3 weeks prior.  I felt pretty good about it but wasn't sure how the day would go.  I would only know after the race started.... 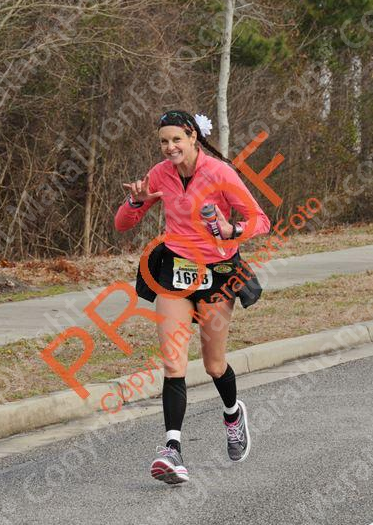 And finally the gun went off.  It took me a minute to even get to the starting line.  There were a LOT of people and it was quite annoying to be that close to so many runners.  So it goes at a 'big' race...  I ran the first few miles with one of Cindy's friends - I just kept my eye on the flower in her hair as my 'goal' - she said she was pretty consistent with her marathon running and was about 3:45 - 3:50 so I tried to stick with her.

The rain started to taper off and I took my coat off and tied it around my waist but it sure was windy!!

After a few miles, I knew it was going to be a long day.  My heartrate starting climbing and my legs were already feeling fatigued.  ugh.  At that point I knew that BQ was out of the question so I just fell into a rhythm where I was running more to my heartrate and not my pace.

About the 11 mile mark where the half marathoners were making the turn to go to the finish I was SO TEMPTED to turn with them.  I was tired and was not looking forward to 2 more hours of running.  It was hard cause that goal was long gone, and the last 13 miles I knew were just going to be "character building".  I.  Carried.  On.  The sun came out and the wind persisted.  So did I.


Managed to finally reach that finish line in 4:11.  Certainly not my fastest time, but not my slowest either.  Respectable considering I had not been feeling well.

I met up with some peeps at the finish for a few hoppy beverages, then a few more...  Hung out with Cindy and her friends, Mark and Fred n MTC folks, Charles and Blanca... (happy b-day Blanca!)

Hitched a ride back to my hotel where I took my post race ice bath in the Atlantic, followed by a long soak in the hot tub with running peeps and more cold ones.

Went to lunch with Dave and Olga - met up again with them later on with Rebecca too and went to House of Blues.  THEN had the NCRC party later that night followed by a late night polar plunge n more hot tubbing - muscles were sore by this point!  Hot tub was VERY helpful in loosening the marathon legs up.

The next day I spent the morning hanging out with Rebecca and went up on the sky wheel.

This weekend had a run in it, but honestly I had more fun with the social part around it.  I am not sure I would run the full at MB again, but would run the half.  I like that so many folks from the Raleigh area showed up and is well attended by both MTC and NCRC.  Its a fun event!

Boston is now officially on the back burner for now.  I might pick it up again in the fall or next spring, but things in my life have been changing and have been getting busy.  It is hard to get the quality training in with as much as I have been working and spending time with my kids.  I will be running still, but just not the fast stuff.