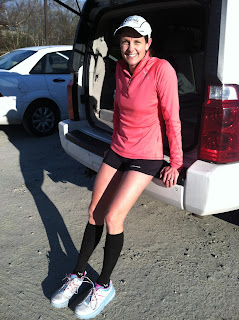 What I thought was going to be a tough training run with Mr. Anderson turned out to be something a whole lot more.   Let me explain…


As some of you know, I am in the midst of marathon training in my attempt to qualify for Boston in March.  I have increased my weekly mileage, incorporated Arrichion yoga for stretching, Arrichion circuit training for strength, core workouts and I go see Jay once a month for a painful, yet needed, massage.  The combination seems to be working as my strength is increasing, my times are coming down, and nothing seems to be hurting outside the normal DOMS pains…

I knew the workout was going to be about 12 ish miles: 1 mile warmup, 3 miles at marathon goal pace, ½ mile recovery, 3 more MG miles, ½ mile recovery, 3 MORE MG miles with a mile cool down.  I am fairly used to running MG pace, but not holding it for this many miles.    It was also chilly – about 38 degrees, but the sun was out and the winds were calm.

I ate a decent lunch around 11 – nearly a whole footlong sub from subway ;) washed it down with a full sugar, full caffeine sweet tea.  Thought that would be good fuel for the days run.  Caffeine seems to work for me on days when I need to “bring it” Just ask Ultraman ;)

In another effort to “bring it” I channeled my inner “Laura” and chose to wear my booty shorts and compression socks.   I also pulled out the Hokas I bought from Will which were fast for him at Weymouth Woods 100K.

Joey and I met at the McDonalds on the Crabtree greenway like we so often do.  I didn’t bring a handheld, gu’s or s-caps.  Its only 12 miles right?  Actually, when it’s this cold, it’s nice not to have to run with a handheld or worry too much about getting dehydrated.

Mind you, I am running naked – as in, without my Garmin 305 watch.  It drives me crazy not knowing how fast I am going or how far we have been.  Lately I keep having to ask Joey what our pace is, and depending on his mood he may or may not tell me!  :P  Been having some issues with the 305’s battery life.  Right now it is in 2 pieces on my desk awaiting a battery I purchased on amazon.  Long story short, I was debating whether or not to send the watch in for a refurb or try n save $50 and just replace the battery myself.  Andy, in the process of prying off the back off the watch with a just sharpened pocket knife, sliced his hand open…  ugh!  So much for saving a buck… :s  anyway, back to the story…

We started off with our warmup mile feeling good.  Without much warning Joey hits the lap button on his watch and says “here we go” and we were off on our first set of 3 miles.  Legs felt great and I felt strong. It was not to say that it was not work, because it was, but it was not too bad.  Took a half mile recovery and we were back at it again.  This round was a little tougher but it was still good.  Another ½ mile recovery.  Now somewhere in here I mentioned to Joey that if I were running a half marathon, I would most certainly do better than the 1:59:55 that I did at both OBX Marathon 2010 (half way point) and at Tobacco Road half 2011 – when I paced it.  I didn’t think much more of it but was focusing on the workout at hand.  Meanwhile, Joey was doing simple math in his head, adding 1.1 miles to our route without me even knowing it...  Starting the last set, just as he did with the second set, he was talking me through it.  He was saying something to the effect of “ we are at mile 20 in the marathon.  Legs are getting a little more tired but everything is going good.  Feeling strong, keep focused etc.”  He is so awesome like that.  Most times all I can do is breathe while running, not saying much, but here he is nice and easy talkin me through it.  I was feeling great, but indeed saw the marathon parallels he was getting at with each interval.

We got to the end of the greenway, just short of the 3 mile distance so we made a right hand turn straight up “that hill”  ARE YOU KIDDING ME????  AHG!  He was laughing and singing while running up it.  Ya know what?  I ran the thing too – tackled it as a matter of fact.  Wasn’t going to let a little hill throw my time off!  Got to the top at exactly 3 mile split and had to take a 10 second breather and cuss Joey out for doing that to me – lol!

I worked those last 2 miles with what I had left.  Kinda wished I had my handheld at this point to get a drink.  My mouth was really dry, and at the same time I had some issues with needing to spit….  I had been fighting off a chest cold for a couple of days and was coughing some.  Now there are some things I can do well like pee in the woods and crop dust, but I still have not mastered the art of spitting while running.  Most times I do ok with it, but this time it did not go so well…  :s  Gathered it up, spit it out, then it kinda just hung there….  Damn…  had to catch it with my hand and wipe it on the inside of one of my layered shirts.  Eew  :P  Guess that is something I aught to work on, huh?  Couldn’t dwell on it, kept movin and hoped that Joey didn’t see me.  Not like it would have mattered anyway – he might have given me pointers – lol!

I said to Joey, “tell me when we reach the distance” cause all I was doing was hammering it in at that point with no clue of the time, pace, or distance.  Joey nailed the spot to stop, right at the parking lot where our cars were, right at 13.11.  Yep, he had to add in the .01 just to be official.

I asked him what the time was and he said 1:49 something and I nearly flipped out!  I was so thrilled to have nailed that PR on such a great day with the man who got me into running again.  I hugged him and yeah, shed a few tears of joy - only a few ;)  Wow.   To quote Jimbo – “Awesomeness”.  To quote Gene “Epic $#!t done”

Yeah, I know it was not an official race.  I might have been able to crush that time had I run a half marathon before this.  I have only run a handful of half marathons and most were trail.  I could not come close to the 2:00 time on the single track!

Managed to negative split the last mile at 8:08 :D

To infinity - and beyond!!

Looking forward to running the Myrtle Beach half in a few weeks and seeing what happens when I run an “official” half marathon, and hopefully without a chest cold!

Check out the epic medal! :)  Joey made it for me.  Awesomeness indeed! 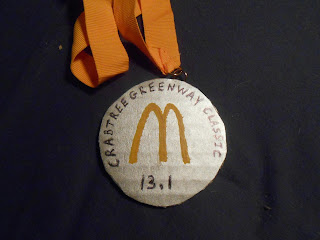